In honor of Mother Nature, and the upcoming anniversary, I have provided informational links to what went down this day in Oshkosh history. After which is my deteriorating memory of the event. If you have a memory of this storm please share by posting a comment.

Severe Thunderstorms in East-Central Wisconsin
During the late evening of June 11, 2001, a large thunderstorm complex (which included a bow echo and subsequent “bookend vortex”) moved across central and east-central Wisconsin. Winds exceeded 70 mph across the area, resulting in thousands of downed trees and damage to homes and businesses. More (website) 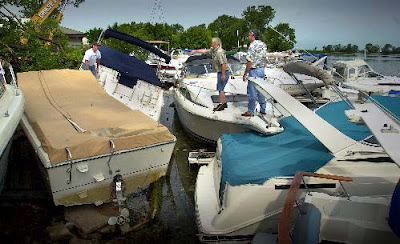 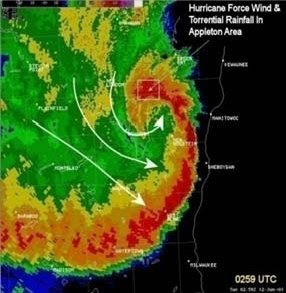 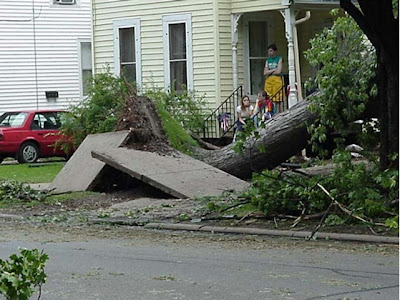 My story
My wife and I were in between apartments at the time. The apartment we were moving out of was on Kentucky St, and the apartment we were moving into was on New York St. A few blocks apart. While she was working at the Chalice that evening, our roommate Todd and I got to become one with the storm. Todd and I were at the new apartment on New York St when the storm approached Oshkosh, and from the vantage point this apartment gave us we decided to head over to the Kentucky St apartment for a better and rain free experience. The porch at the Kentucky St apartment faced East and the storm was approaching from the Northwest. Todd drove and parked in front of the house on the street. As the storm got closer the winds and rain were really packing a punch. We wondered if what we heard from the winds was a tornado coming towards us. At that point we both agreed that Todd should move his car from the road into the garage. No more then two minutes after Todd moved his car, the top of a very tall evergreen tree snapped off and landed exactly where Todd’s car was parked. It was a hefty chunk of the tree as it was at least 8′ long. That was the beginning of the major winds that would cripple Oshkosh soon after. The winds gained strength and it was now impossible to peak around the corner as the rain was horizontal and felt like tiny needles penetrating the skin. These winds lasted for what seemed like forever. During the duration of the winds you could hear/see trees falling and power poll transformers blowing. It was a spectacular site. Once the storm passed we decided to head back to the new apartment and assess damage, however our route there was completely blocked by fallen trees, as was pretty much every street in Oshkosh. We decided to walk. The scene was chaotic with people driving on lawns over fallen power lines. The damage was extensive. Oshkosh suffered many natural and man-made losses.

If you have a memory of this storm, please share by posting a comment. Other memories located here.